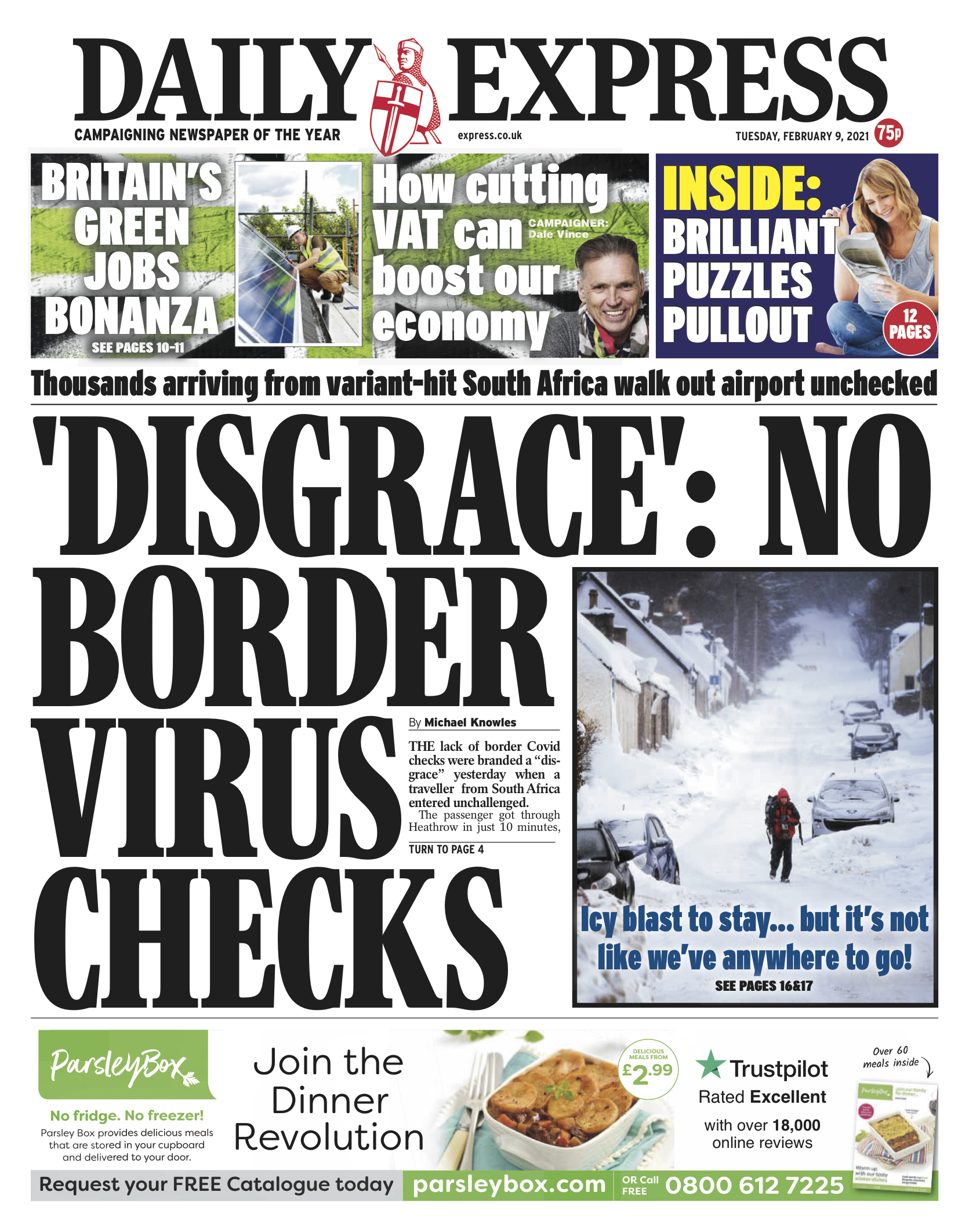 THE lack of border Covid checks were branded a “disgrace” yesterday when a traveller from South Africa entered unchallenged.
The passenger got through Heathrow in just 10 minutes,  only 20 hours after leaving South Africa, where a mutant variant is running rife.

Sharon Feinstein had all her documents ready – including her Covid test result and locator form stating where she would be self-isolating – but not one official asked to see them.

Sharon, who lives in Islington, north London, said: “I was in tears. I just couldn’t believe what happened. I could have had Covid, they don’t know where I am staying, they didn’t ask.

“As a country we’re messing up.”

The writer and journalist flew via Doha, Qatar, after British Airways offered her connecting flights on Qatar Airways.

After landing yesterday lunchtime, Sharon, who had been visiting her mum in South Africa, was ushered towards HeathrowTerminal 5’s e-gates. Border Force officials did not ask to see any of her forms and, after scanning her passport, she left.

She said: “I had everything ready, my certificate showing I had tested negative for Covid, filled in my passenger locator form, I had the entry and exit permits from SouthAfrica.

“No one asked for my Covid certificate. I didn’t see anyone. I even looked for someone. She added: “The mutant variant in South Africa is rife. You can’t believe how many people have it there and are really ill. “People should have tests after five days and again after 14. That is what happened when I arrived in South Africa. “They were incredibly scared of the British strain of the virus. Why can a third-world country get it right and we can’t?” Some 147 cases of the South African variant have so far been identified in the UK. Experts warn they are likely to be the tip of the iceberg as they are the result of random checks on just five to 10 per cent of all positive tests. On December 24 the Government imposed a travel ban on South Africa and later extended it to nine other countries in southern Africa to try and stop the variant spreading here. The UK also compiled a “red list” of 33 highrisk countries, including most of South America, southern Africa and Portugal, all of which have new Covid variants. Anyone returning from these countries must isolate for 10 days in guarded hotels from Monday. As that deadline approaches, Sharon said: “We are spending a fortune on tracking those with the South African mutation but anyone from my plane could have blithely infected 100 people wandering through the airport. “I want us to succeed and get back our lives. We can’t if this ineptitude continues.” Her story comes as ministers were warned that around 200,000 people will arrive in the UK before passengers from the “red list” are ordered to quarantine in a hotel. The Government is also expected to announce soon that all arrivals must have a Covid test on the second and eighth day of self-isolation after they get here. The new rules will not just apply to those heading into the UK from “red list” but those self-isolating at home too. One source said it could lead to an end to short-haul flights as “demand will be nil”. The Department of Health said: “Throughout the pandemic, the Government has put in place proportionate measures that have led to some of the toughest border regimes in the world. “It is important the Government continues to take the necessary steps to protect people and save lives.” But Labour branded the 50-day delay between identifying the South African variant and hotel quarantine being introduced as “a big mistake”. Party leader Sir Keir Starmer said the South African variant was “the single biggest risk at the moment”, adding: “If you can believe it, it’s going to be 50 days from knowing about the variant to border restrictions. Add to that a number of other countries we now know have the South African variant, and they are not even in the scheme for quarantining. “This is leaving a back door open at a vital stage in the battle against the virus.” Shadow home secretary Nick Thomas-Symonds said: “Hotel quarantine for travellers will be introduced on a far too limited basis more than 50 days after the South African variant was discovered in the UK. This is a big mistake and is putting people at risk. “Worse still, of the 41 countries that have confirmed they have cases of the South African strain, 29 are not subject to the hotel quarantine controls, neither are a further six with the Brazilian variant. The quarantine system in place is clearly not fit for purpose.” Yvette Cooper, chair of the Home Affairs Select Committee, told the Express: “The Government’s Covid border measures are full of holes. “Most passengers won’t be covered by hotel quarantine and no one is tested at the airport on arrival before they get on public transport home. “The Government boasts that we have one of the strongest border regimes in the world but it is simply not true. If we want to protect our vaccine programme from new variants, we urgently need stronger border measures.”