← Back
BY SHARON FEINSTEIN 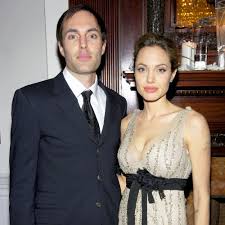 IF there is one man who knows the truth about Angelina Jolie, it is her brother, James Haven. His sister’s relationship with Brad Pitt has caused much controversy and speculation ­– but he has kept quiet.

Until now, that is. With the adoption of her new son Pax causing shockwaves around the world James, 33, has finally spoken out.

He reveals the true nature of her relationship with Brad – and why she is so keen to adopt children.

“Brad has changed my sister a lot. They have an extraordinary bond, it’s not on the usual level,” said James, speaking at his Los Angeles home where he lives 20 minutes away from Brad and Angelina’s house.

“He’s great with her and I’ve never seen a brood like that who are all so supportive of one another.

“Brad is so strong for her. When she feels vulnerable, he has the most incredible strength. She says she couldn’t have adopted more children after Maddox without him.”

In the absence of a father figure (both he and Angelina are estranged from their father, actor Jon Voight), James says his sister thrives on Brad’s dedication and support.

But that is not the only thing that keeps them together. “The great thing about them is they really get each other’s sense of humour and make each other laugh a lot,” he says. “They talk about politics a great deal and are very creative with projects they’re working on. There’s an amazing creative buzz between them, and now that they’re the parents of four they share so much joy over that.”

James, who is so close to Angelina she has tattoed an H (for Haven) on her wrist, denies recent rumours of a rift between the couple.

“I’ve never seen any sign of tension between them, and if it keeps going the way it’s going, they’ll be together for life. Brad is totally committed. He’s completely involved, loves the children and is terrific with them.

“He travels with Angelina on UN trips. They went to Tahiti together and go to small villages to help the impoverished people, which is never publicised and people don’t know about.

“They make all their decisions together. It’s rubbish that she tries to control him. They have a very balanced relationship. I’ve never seen them have moments where one is nagging or trying to control the other.”

Their handsome movie-hero father,  star of Midnight Cowboy, moved out shortly after Angelina was born, and only appeared irregularly in the two children’s lives.

When he went on a prime-time US talk show and accused his daughter of having “serious mental problems”, the chasm between them became insurmountable and Angelina completely cut off from her father, erasing her surname, Voight, and banning him from seeing her children.

James describes Brad as being like the father his sister never had. “Angelina chose a man as far away in personality as possible from our father. Brad is loving, caring and wanted the responsibility of being a dad, which my father didn’t have.

“There were times when our father was awesome but my biggest and most abiding memory is that he would look more to our faults than to our strengths, and that’s what was so hard.

“Now that our mother [Marcheline Bertrand] has died we’re two orphans, Angie and I, so she has a deep understanding of the orphans she adopts.”

The Jolie-Pitt brood includes Maddox from Cambodia, Zahara from Ethiopia, their own biological child Shiloh, born in Namibia last May, and now Pax from Vietnam. And despite the furore – and the threat that Pax’s natural mother could try to make some kind of claim over him – James insists it won’t stop them repeating the process with another child in another country. “There is no limit on the children she and Brad are adopting. It could be scores. I’ve never heard an end number in their conversations,” he says.

“She talked to Brad about which country to adopt from this time and they wanted to choose Vietnam because it’s close to Maddox’s roots in Cambodia. When Angelina was filming the first Tomb Raider she spent time in Cambodia and fell in love with the

people. She feels the same way about the Vietnamese. Angie and Brad took a trip to Vietnam together last year and planned it then.”

His sister, who James says has always felt she had a spiritual calling, wants to show the world that although the UN so often fails, she and Brad can create their own personal United Nations which really works.

“The UN is supposed to be this amazing body that brings together all these different countries in the world,  treating them like one big family, and that’s what Angelina is trying to do.

“‘Pure and genuine religion in the sight of God the Father means caring for orphans and widows in their distress and refusing to let the world corrupt you.’ That’s the quote Angelina and I live by. When I read that I just went, ‘that’s it’. That is the principle Angie is living by. She’s been to many of these countries and she knows what the alternative is for the children if she doesn’t adopt them.”

While Angelina was having her only biological child, Shiloh, at hospital in Namibia, it was James who held the fort at home with Maddox and Zahara, waiting for the phone call that would tell him he’d become an uncle again.

“The two children were so excited and we all sat and held hands,” he says. “While Angie was pregnant Mad kept pointing to her belly and when she asked, ‘Who’s in there, Mad?’ He would say, ‘Sister.’

“He’s terrific with Zahara and Shiloh, there’s no sibling jealousy or rivalry in that family. They are the happiest group I have ever seen.”

James also explains the mystery of the name Shiloh – it was originally meant for his middle name.

“It’s an honour beyond any honour I’ve received in my life,” he says. “Before I was born I was going to be Shiloh, and at the last second my parents gave me Haven instead. So it was great when Brad and Angie came to me and said,

‘We’re thinking of names and our favourite is Shiloh. Would it be OK?’ I was almost in tears.

“I can see Brad in little Shiloh, my sister, too. She’s got my dimples, and there’s a little bit of my mom in her.

“Now I’m very excited about having another nephew, and can’t wait to meet him. I heard he’s lovely – very shy at times but has tremendous energy.”

James also said Angelina had no idea whether Zahara had the HIV virus when she adopted her.

“After the adoption Angie did a test on Zahara for HIV. I know that when Angie adopted Zahara she didn’t know yet whether her adopted daughter was carrying the HIV virus or not. That shows just love beyond love.

“It’s because of our mother that she’s like that. I’ve never met anybody more selfless than my mom, she gave everything to her children and so in turn she taught us to be very giving and to care for people. It was part of our psyche.”