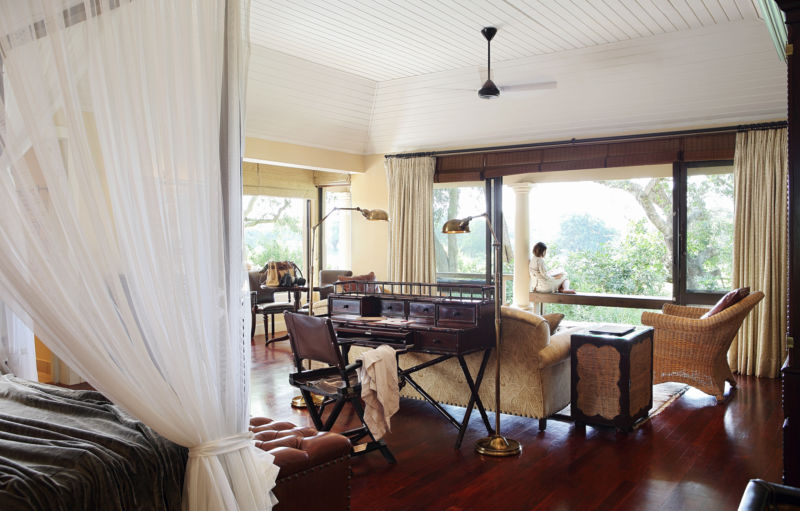 At dawn, post Lowveld thunderstorm, we stood on the broad terrace of Rattray’s Camp facing the wide riverbed with its first pools of water, the sky the colour of purple pressed grapes. Our soft-spoken, knowledgable guide, Gordon, grabbed his shotgun and prepared the Land Rover with blankets and flasks of water. There are never more than four in a Landie, and for two days I had Gordon to myself as we weaved through the spiky acacia and mahogany trees.

The animals move slowly across the hush of the bush and it all seems so still until you spot the giraffe, zebra, buffalo and slow lumbering elephants. Tawny eagles dive through the sky. The impala, living under constant threat, jerk their heads at every sound.

There’s not much to touch Rattray’s for game viewing, attention to detail and tasteful luxury.

‘Animals live in the moment in their daily struggle
to find food, water and protect themselves. There’s no thought of future or past, it’s only the present, and a lot of people have lost touch with that. Watching them teaches us to cherish what is important in life right now, not what might happen next week,’ says Gordon, who has been at Mala Mala Rattray’s for 11 years.

Seeing the Big Five is always a highlight but there’s a special award at this camp – a certificate for the Mala Mala Seven – and I was hugely fortunate to receive it. That’s because we found three cheetah and a pack of African wild dogs and their pups.

‘Only five percent of our guests get the certificate. You were lucky, and have a good, positive aura,’ Gordon smiled when he presented it.

The privilege of being in a camp like this is at risk, with the threat of sophisticated poaching, population expansion and drought. It’s a piece of paradise and a trip of a lifetime. malamala.com